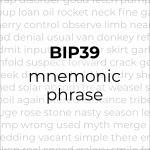 With introduction of BIP39, the whole process of generating and accessing bitcoin and other cryptocurrency wallets was simplified. This was to simplify process of creating recovery seeds for your wallet and restoring it. BIP39 comes from Bitcoin Improvement Proposal no. 39.

With BIP39 recovery phrase (also calles mnemonic phrase), user can backup and recover Bitcoin and other cryptocurrency wallets without the need to use complicated private keys. Instead wallet can by recovered using seed phrase made of natural language words. BIP39 allows user to use a set of words to access their cryptocurrency wallet instead of complicated private key. This set of words will be translated by wallet software to generate a deterministic wallet addresses. The wallet software uses algorithms to create a private key internally from your BIP39 words.

With this example you can see that the BIP39 mnemonic phrase is indeed much easier to use than previous private key recovery phrase. It is also much harder to make a mistake while writing it down.

The BIP39 protocol uses a list of 2048 carefully chosen english words. Although the lists in different languages exists, it is not recomennded to use them because most wallets do not support other than english words.

a) smart selection of words

letters to unambiguously identify the word

prone and more difficult to guess

(i.e. implementations can use binary search instead of linear search)

– this also allows trie (a prefix tree) to be used, e.g. for better compression

plus full BIP39 Wordlist in Pdf

In theory, longer recovery phrase = more secure wallet. But even the 12 words mnemonic phrase gives more than enough security for this moment (January 2022). For the foreseeable future the 24 word recovery phrase would be the gold standard. The 24 words recovery phrase has a number of combination bigger than than there are atoms i n the  known universe. This is why full length (24 words) recovery seed phrase gives you full protection from hackers trying to randomly generate your mnemonic phrase and getting access to your fund.
This is just the basics and we will write about this topic more in the future.

Wallet software generates a list of words and asks user to write it down on a piece of paper and put it in secure location. With your Bitcoin mnemonic phrase or recovery seed phrase, anyone have full access to your whole wallet including all your funds. This means you should store it in secure location so no one but you can access it.

Your mnemonic phrase written on piece of paper, even if stored in a locked safe or buried down in a pile of other documents is still a piece of paper. Different kind of situation can put your backup phrase in danger and make it unreadable in the future. Paper can be destroyed easily.

This is why you should make a backup of your seed phrase using metal and preferably stainless steel crypto wallet like Coinplate. All Coinplate products use 24 words BIP39 standard. For example with Coinplate Alpha you can easily backup 1 Ledger Nano S/X wallet or two Trezor T wallets.

Stainless steel is much stronger than paper. Stainless steel bitcoin wallets like Coinplate Alpha or Coinplate Grid can survive a house fire or collapse, getting run over by a truck and still be perfectly readable after 10, 20 or even more years. Coinplate stainless steel wallets are rust resistant and waterproof. Stainless steel survives well even in ocean water, so you will rest assured that it will last for decades. 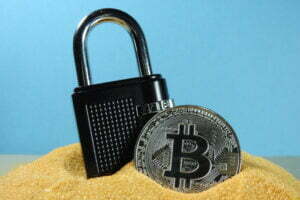 Continue Shopping
We use cookies to ensure that we give you the best experience on our website. If you continue to use this site we will assume that you agree to that. Privacy policyOK